The name of the breed covers two varieties of the same breed, the only difference being the waby the dogs carry their ears. apillon is a French term meaning "butterfly", and the ears of the papillon actually resemble the wings of a butterfly. The Phalène , on the other hand, has hanging ears resembling the wings of a moth, which is at the same time the origin of its name. The origin of the dogs is Italy, but today they are counted among the French/Belgian breeds.

They have a long history that dates back to the 16th century when they were discovered by the French king Henri III. For about 250 years, they were very popular at the royal court and shown on many paintings, especially portraits of queens and noble ladies. Normally the phalène was shown on the paintings. The French Revolution, however, nearly put an end to these lively, silk-haired escorts of the noble ladies and children.

At the beginning of the 20th century, breeders in France and Belgium dedicated their efforts to revitalizing the breed and promoted pure breeding, and therefore France and Belgium are today considered as the countries of origin. The papillon variety with the erect ears quickly became very popular. Today, the papillon is more frequent than the phalène that is found only rarely. The two breeds exist in all parts of the world.

Today, papillons and phalènes are normally proportioned, vital and long-lived dogs: The shoulder height is approximately 25-30 cm (breed standard approx. 28 cm), and efforts are being directed to achieving an average weight of 3 - 4 kg so that extreme miniature breeding will not lead to health problems:

The miniature spaniels have normal proportions like large dogs. They are small dogs but not an extreme miniature breed. They have an easy-to-groom half-length coat that is left in its natural condition. They have tough legs that enable them to cover the same daily distance as a human. 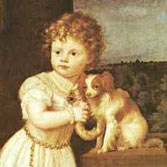